EVRY is working in a targeted way on becoming the leading IT company in the Nordic region. We made significant progress towards this in 2016.

A fundamental element in recent years has been optimising EVRY’s cost structure. Clear and targeted measures have been implemented to simplify EVRY’s organisational structure, cut its administrative costs and reduce its fixed costs in relation to its infrastructure business. The strategic partnerships we have entered into with several large technology companies, particularly IBM, have also enabled us to modernise our business cost-effectively, and have strengthened our focus on creating value-adding services. These strategic partnerships give EVRY access to first-class technology solutions, and enable it to offer competitive cloud services and hybrid solutions to small, medium and large organisations. 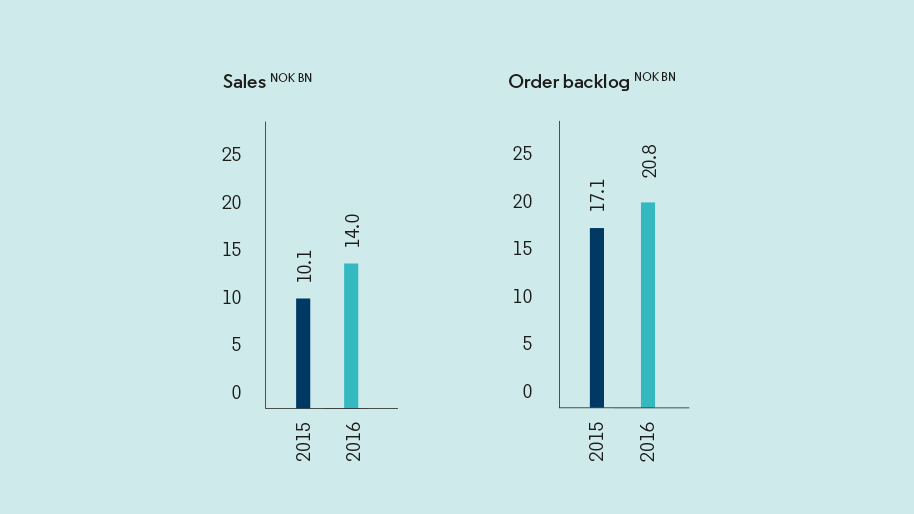 At EVRY there is a focus on ensuring responsibilities are clearly allocated and on creating a strong performance culture. After implementing numerous organisational measures in 2015, EVRY was able to focus on customers and the market to a much greater extent in 2016. Contracts totalling NOK 14.0 billion were signed during the course of the year, representing an increase of 40% from 2015. This record-high level of sales meant that EVRY ended 2016 with a record order backlog of NOK 20.8 billion, an increase of NOK 3.7 billion from the end of 2015.

EVRY has also worked systematically on delivering operational excellence across the business, particularly by optimising its resource use. The monthly billable utilisation rate increased to 82.4% in 2016 from 74.4% in 2015. In short, the improvement measures helped EVRY achieve an adjusted EBITA margin of 10.8% in 2016, up from 6.3% in 2015.

The challenge for EVRY in the years ahead will be to serve our shareholders by ensuring profitable growth. The company’s ability to manage change and its performance in 2016 give us grounds to believe that this is a realistic ambition. The numerous opportunities in the market and the company’s record-high order backlog, good cost structure and lower risk profile are important building blocks. EVRY reported organic growth of -0.9% in 2016, but we saw a clear positive trend through the year, with the company achieving organic growth of 1.5% in the second half of the year and 2.2% in the final three months.

EVRY also improved its position with its customers and employees well as other stakeholders in 2016, and we are achieving improved scores on both customer and employee satisfaction surveys. In 2017 we will take the next steps on our transformation journey, as nothing is more natural in a performance culture than aiming higher.

“Nothing is more natural in a performance culture than aiming higher.”